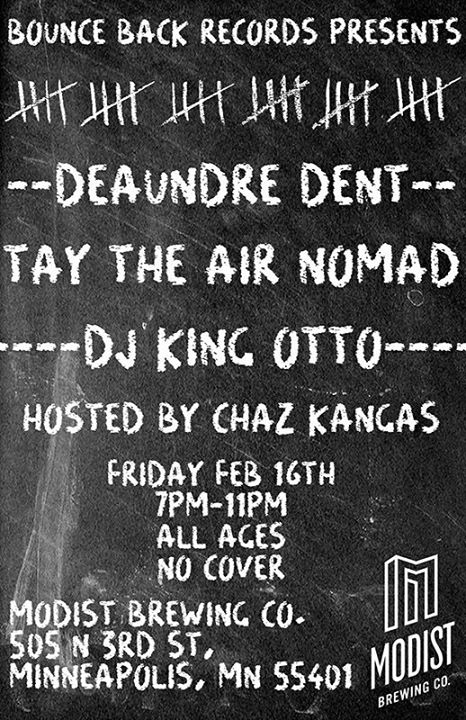 Music at 7pm
All Ages
No Cover

Modist Brewing Company is setting up the big stage in back, where they make amazing beer, to have an amazing dance party and live music from DeAundre Dent and Tay the Air Nomad.

DJ King Otto will be performing his Infamous 45 only Vinyl Set.

DeAundre Dent (BatMN ) is an aspiring artist, engineer, producer hailing from the northside of Mpls,. He has worked and collaborated with artist across the city such as Peoplez, Greg Grease, and Medium Zach. Recently opened up for ZULUZULUU and Lady Midnight.

Chaz Kangas will be the Host. Chaz Kangas was born in Minneapolis, Minnesota. First grabbing attention for his dominance in rap battle circuits throughout the Midwest and East Coast, Kangas made headlines for hosting and performing at the final concert at famed NYC nightclub CBGB’s, the final instore at the last Virgin Megastore and for co-holding the Guinness World Record for longest consecutive freestyle rap performance (26 hours) which he hopes to break again soon